HUNTSVILLE, Ala., Oct. 18, 2021 /PRNewswire/ — Together with state and community leaders, Toyota Motor Manufacturing, Alabama (TMMAL) held an event to celebrate the first of Toyota’s latest engine products for the all-new 2022 Tundra to come off the production line. These new engines, a hybrid electric powered twin-turbo V6 engine and the gas-powered twin-turbo V6 engine, usher in the next era of powertrains being assembled in Huntsville. 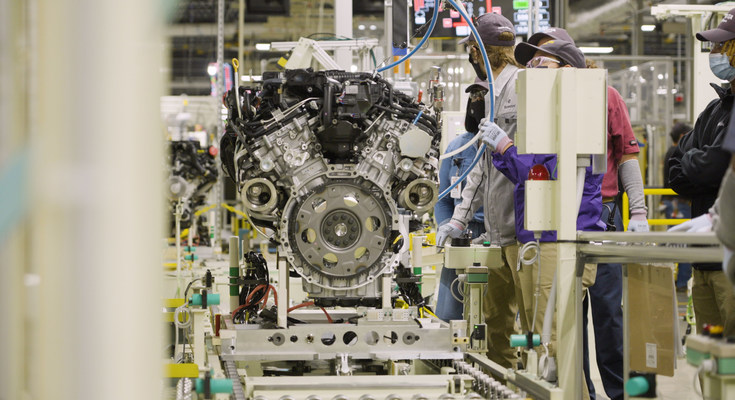 Toyota Alabama is the sole producer of both engine models for the 2022 Tundra in North America, creating long-term employment stability for the plant’s 1,800 workers.

«Our team members in Alabama recognize the confidence and trust Toyota places in us since we are the only plant selected to build engines for the all-new Tundra,» shared Jason Puckett, president of Toyota Alabama. «Launching the new twin-turbo V6 line and celebrating our 20th anniversary remind us here just how lucky we are to have such incredible team members who have made Toyota Alabama known as ‘the engine capital of the world.'»

At 142 yards, both of the twin-turbo V6 engine options for the 2022 Tundra are being built on the longest Toyota engine line in North America. The V6 Turbo line will produce a new engine every 58 seconds, with a capacity to build 18,000 engines each month. These additional engines push the total capacity for Toyota Alabama engine production to up to 900,000 engines per year.

«For the last 20 years, our state and Toyota Motor Manufacturing Alabama have shared a mutually beneficial relationship that has created remarkable outcomes for Alabamians,» Governor Kay Ivey said. «Toyota’s $288 million investment to produce the all-new twin-turbo V6 engine continues to demonstrate that Alabama is not only open for business, but is the best place to do business.»

About Toyota
Toyota (NYSE:TM) has been a part of the cultural fabric in the U.S. for more than 60 years, and is committed to advancing sustainable, next-generation mobility through our Toyota and Lexus brands, plus our nearly 1,500 dealerships.

Toyota has created a tremendous value chain and directly employs more than 36,000 in the U.S. The company has contributed world-class design, engineering, and assembly of more than 30 million cars and trucks at our 9 manufacturing plants, 10 including our joint venture in Alabama that began production in September 2021.

To help inspire the next generation for a career in STEM-based fields, including mobility, Toyota launched its virtual education hub at www.TourToyota.com with an immersive experience and chance to visit many of our U.S. manufacturing facilities. The hub also includes a series of free STEM-based lessons and curriculum through Toyota USA Foundation partners, virtual field trips and more. For more information about Toyota, visit www.toyotanewsroom.com.

Our Lady Warns The World Of Impending Disaster In EWTN’s «Kibeho: Listen My Children»