IRONDALE, Ala., Nov. 11, 2021 /PRNewswire/ — Many have heard of the horrific genocide that took place in Rwanda in 1994, when 200,000 Hutus slaughtered 800,000 Tutsis and some moderate Hutus – their own countrymen. But few are aware that Our Lady warned the country about the impending disaster – and how to avoid it – during a series of apparitions to three school girls 12 years earlier. The visions of destruction, torture, and human carnage as well as a river of blood viewed by one of the visionaries were so terrifying that the young girl told Our Lady she was afraid she would never be able to sleep again. 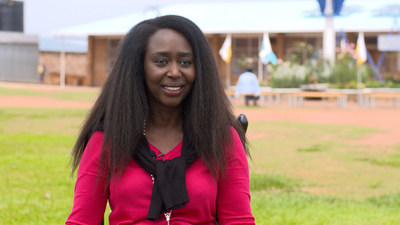 «To refuse Jesus is to refuse Paradise.» — Our Lady of Kibeho to Rwandan visionary

The Nov. 24 premiere will be preceded at 8 a.m. ET by «EWTN Live,» with Immaculée IIlibagiza, who appears prominently in the docudrama. Immaculée is the woman who told the world about the genocide in the 2017 best-selling book, «Left to Tell,» which was later made into a well-known documentary by the same name.

In addition to observations from Immaculée, the docudrama includes footage of the actual Rwandan school girl visionaries, the mental torture they endured by those who did not believe them, the doctors who were charged with determining if they were mentally ill, and church officials who made the final determination.

Among other things, Our Lady of Kibeho requested that the people of Rwanda pray the Seven Sorrow Rosary, a devotion given to St. Bridget centuries earlier which had largely been forgotten. During the genocide, the sisters at the convent school the visionaries attended prayed this rosary from morning to evening. All survived the bloodbath. (Find meditations on the Seven Sorrows Rosary and more in this little booklet from EWTNRC: https://bit.ly/7SorrowsRosary

In the film, we witness Our Lady taking one of the visionaries, Marie Claire Mukangango, to heaven, hell and purgatory. When Marie Claire asks Our Lady why she was shown these places, she tells her: «I showed you so you know the life that matters most is what is coming after this life on earth. Go and tell everyone. Encourage them to live the right way. Tell them to live without respecting God is the ultimate waste of time. They will regret it bitterly.» Our Lady also said: «You have to tell the people that these places actually exist. To refuse Jesus is to refuse paradise.»

There is much more to tell about these apparitions. This is a story no one who cares about eternal life should miss.

In its 40th year, EWTN is the largest religious media network in the world. EWTN’s 11 TV channels are broadcast in multiple languages 24 hours a day, seven days a week to over 350 million television households in more than 145 countries and territories. EWTN platforms also include radio services transmitted through SIRIUS/XM, iHeart Radio, and over 500 domestic and international AM & FM radio affiliates; a worldwide shortwave radio service; one of the largest Catholic websites in the U.S.; electronic and print news services, including Catholic News Agency, «The National Catholic Register» newspaper, and several global news wire services; as well as EWTN Publishing, its book publishing division.